Lahijan, the bride of the Iranian cities

Lahijan, the bride of the Iranian cities 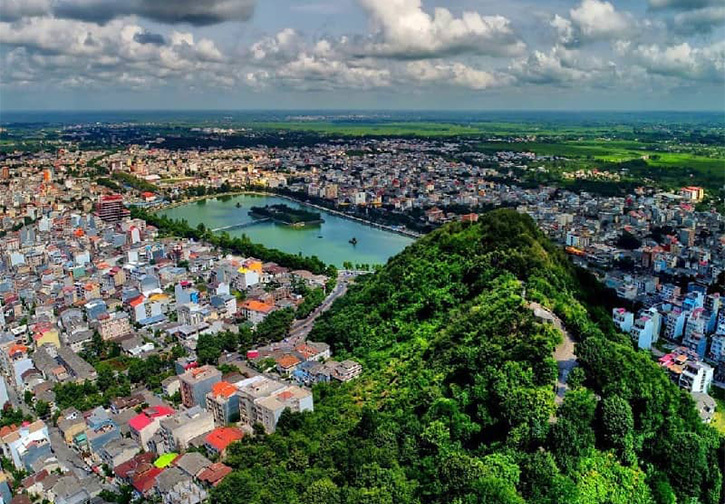 The lovely city of Lahijan is one of the most attractive tourist areas in the north of Iran, with a rich history and full of incredible untouched landscapes. This city is located in Gilan province and the south of Caspian Lake (the largest lake in the world). Lahijan is located 40 km east of Rasht and 60 km west of Ramsar. Also, it’s distance from Tehran (the capital of Iran) is about 300 km. The population of this city is about 110,000 people.

Lahijan, which is known as “The bride of Iran’s cities,” “the land of fragrant tea,” and “the city of Bitter orange,” is located in a smooth and plain environment, and its proximity to the Caspian Lake causes this city beautiful and rich in terms of climate. The average height of this city is about 94 meters above sea level. It is interesting to know that Lahijan was conquered by “Uljaito” in the early 14th century in 1305 and later became the capital of the “Kiaian” government.

Amir Kalaye International Wetland in the northern part of Lahijan is one of the stunning wetlands of Iran, full of wonders of creation. One of the unique beauties of the Amir Kalaye lagoon is the growth of white water lilies that float on the lagoon. This wetland has an area of 1230 hectares, and its depth is about 2 meters on average. The exciting and unique thing about this lagoon is that it has fresh water despite being located one kilometer away from the Caspian Sea.

Amir Kalaye Wetland was registered in the list of international wetlands in 1975 due to its essential environmental characteristics and is under the supervision of the Environmental Organization. This wetland is the habitat of 11 species of fish and the place where thousands of migratory birds pass and stop every year. One hundred thirty-three species of birds have been identified and registered in this wetland. Also, the growth of wetland tulips from the end of March to the end of August gives a unique look to this lake. 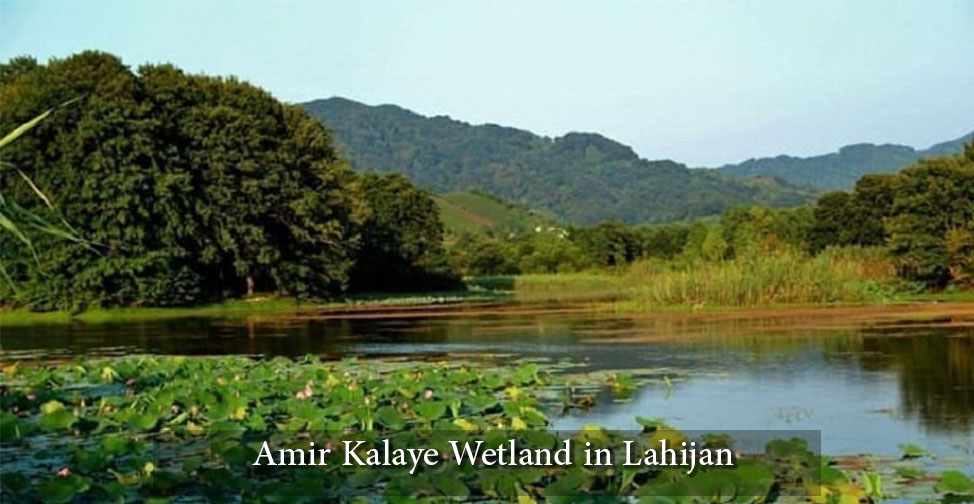 Another beautiful wetland in Lahijan is “Talab Soostan,” which looks like a piece of heaven and always surprises tourists. This lovely attraction is full of fresh water in autumn and winter, surrounded by magnificent trees, swamp plants, and reeds.

Soostan Wetland is the habitat of various birds and aquatic animals due to its favorable climate, vegetation, and freshwater. The lovely access road with fantastic wetland views also makes the trip memorable. The lagoon road passes through a green area, pristine and untouched places, and many tourists always visit this beautiful place due to its easy access. The Shaitan (Devil’s) mountain and waterfall

Shaitan Mountain is one of the most famous places in Lahijan and Gilan, along the Alborz mountain range. Drinking tea at the heights of Shaitan Mountain with a unique view of the beautiful city of Lahijan is a different and unforgettable experience.

Inside Shaitan Mountain is an artificial waterfall supplying water from the Lahijan pool. This waterfall, which flows down from the mountain, has formed a spectacular sight. Bam-e Sabz is also located on the upper path of Shaitan Mountain and has evolved into a delightful and lovely area. A stairway with 70 steps from the side of waterfall to top of the mountain has made a charming, excellent, and enjoyable path for tourists and travelers. 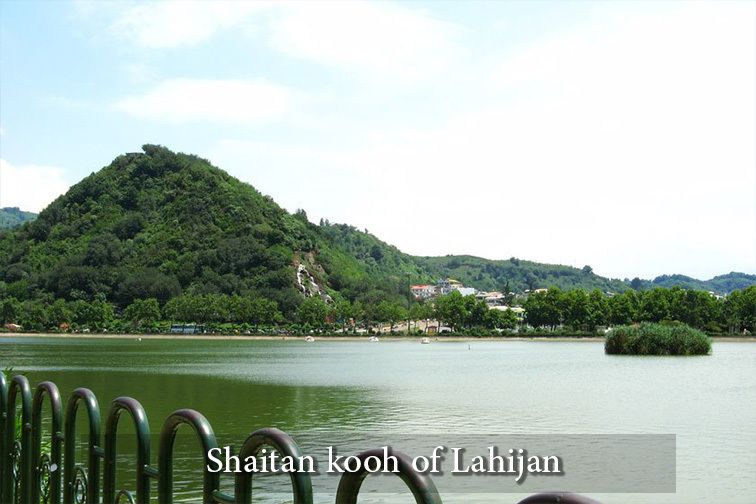 Lahijan pool is an artificial lake and a pleasant place that decorates the city’s urban landscape. This pool is located on the slopes of “Shaitan Kooh” and in the eastern part of the city; its area is 17 hectares and nearly four meters deep.

One of the attractions of this place is the presence of a beautiful island in its center, which is connected to the southern part of the pool by a relatively long cement bridge. This place built by order of “Shah Abbas Safavi,” is popular with tourists and locals and always visited by many travelers. 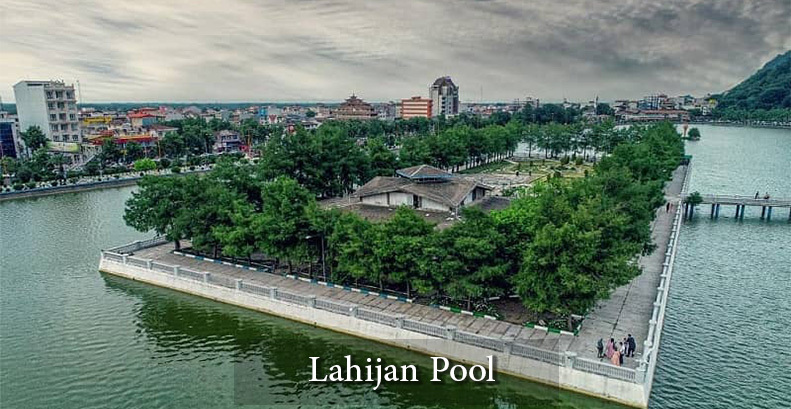 Tea History Museum is another tourist attraction of Lahijan city. This museum is the tomb of “Mohammed Mirza Qajar Ghawanlu,” an educated and high-ranking government official during the Qajar period. He is the first person who popularized tea cultivation in Iran, so he is called the father of Iranian tea. Kashef al-Saltaneh had willed that he would be buried in a grave above the tea hills after his death. After completing the unfinished building next to the mausoleum, this place became the Iranian Tea Museum in 1375.

The tea museum consists of a two-floor main hall, a tower, and two office spaces. On the ground floor of the collection hall, Kashef al-Saltaneh’s documents and items related to tea and tea drinking are exhibited. There are showcases and anthropological works on the second floor of the building.

Akbariyeh Mosque is one of the historical buildings in southwest Lahijan, considered one of this city’s historical and architectural tourist attractions. This building is a valuable and essential heritage of Iran, whose marble inscription tells the date of its construction in 1239 AH during the reign of “Fath Ali Shah” and with the efforts of “Haj Ali Akbar Lahijani.” The architectural style and the decorations done in it are handsome and artistic; In such a way that when visitors enter, it arouses their admiration.

One of the exciting points of the Akbariyeh Mosque is that due to some reasons, it remained half-completed at the time of construction. Today it consists of two parts of the new mosque, which is nearly a century old, and the old mosque, which is connected by a large door. One of the beauties of this mosque is its structural similarities with the Hagia Sophia mosque in Turkey.

The tomb of Sheikh Zahid Gilani

The mausoleum of Sheikh Anwar, also known as Sheikh Zahid Gilani, is one of the famous places in Lahijan in the village of Sheikh Anwar. He was one of the great mystics and dervishes and one of the teachers of Sheikh Safiuddin Ardabili. This beautiful building with its turquoise dome was built in the midst of green and lovely tea fields and is considered one of the national monuments of Iran. 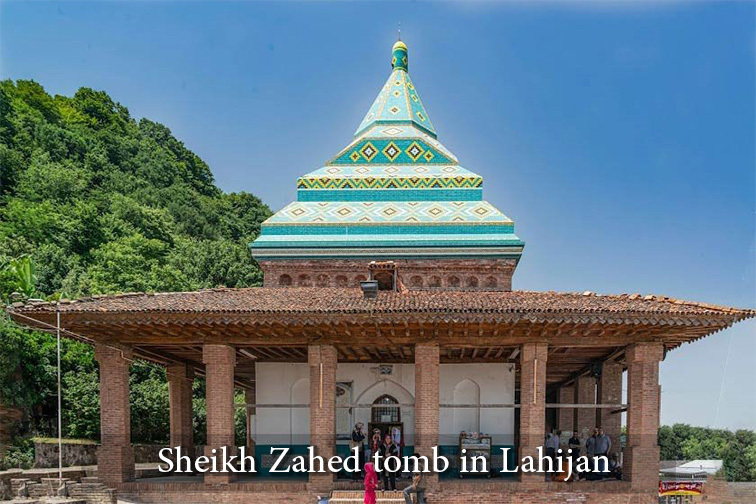 The Brick Bridge of Lahijan

In the west of Lahijan, in a neighborhood called “Parde Sar,” there is a historical structure with an age of about 500 years related to the government of Kiaian. This historical bridge is 50 meters long, 4.5 meters wide, and 11 meters high and is constructed with red bricks, lime, and mortar. Also, this bridge includes five hanging fountains, which doubles its appeal. One of the other old buildings and tourist attractions of Lahijan is the historical “Masjid Jame” of this city”. This old mosque was built during the reign of Kiaian, by order of “Kia Sultan,” and in 893 AH. According to some traditions, this mosque was built on the site of an old fire temple.

It is interesting to know that there is a water well in this mosque, which, according to the belief of the people of this region, Imam Hassan (a.s.) took water from this well for ablution. For this reason, many people throw money and gold into it and light a candle on its edge.

“Golshan Bath” was built on the northeast side of Vahdat Square in Lahijan during the reign of “Fath Ali Shah Qajar”. It is said that this historical monument had many ponds and treasures in the past, of which no trace remains. Also, the bathroom building has a complex plan made of clay, lime mud, and local red bricks. Unfortunately, parts of this historical bath have been destroyed due to the construction of the street, the square, and the city’s expansion, and no traces of it can be seen.

The traditional market of Lahijan welcomes locals and tourists with different colors, smells, and tastes. This market is the best place for daily shopping and access to fresh and high-quality products. On your trip to Lahijan, you can find a variety of colorful foods, local aromatic vegetables, eggs, fish, and olives in this traditional market.

If you want to see the beauty of Lahijan from above and have a pleasant and exciting experience, you need the gondola lift of the city. This gondola lift was built in 2005 with two stations, five masts, and 33 cabins. The length of this gondola lift is 1500 meters. In this distance, you can see beautiful views such as the intersection and the pristine nature of the city, Shaitan Mountain, and tea fields. Also, around the gondola lift stations, there are craft and food stalls, coffee shops, and amusement parks. Culture and customs of the Lahijan people

People of Lahijan speak the Gilaki language. This city’s citizens are Muslims and followers of the Shiite religion. The customs and traditions of the people are rich. Many events such as Nowruz singing, Aros Gole, Gol-Gol Charanbash, Yalda night, Shaltazi, Gile-Mardi wrestling, Khashogzani, and Thirteen years are still performed following the old traditions. Each of these ceremonies has memorable songs and music, which are famous among the people of Iran and familiar to everyone.

The local dishes of the northern regions of Iran are famous throughout the country because of their delicious taste. Indeed, one of the pleasant experiences when traveling to Lahijan is to eat the delicious foods of this region, such as Mizra Ghasemi, Fasanjan vegetable stew, chicken and plums, and Gilaki Shishandaz.

The most popular and unique souvenir of Lahijan is tea; Because the tea is very high quality and brings you a wonderful aroma and taste. Also, the delicious cookies of this city, which contain walnuts and have a great taste and quality, along with pickles, pastes, and jams, are among the products processed in Lahijan with a particular shape and taste. You can buy these products on your trip and give as a gift to your family and friends. In the following, we have mentioned some other souvenirs of the city of Lahijan: The cities in the north of Iran are considered among the most beautiful and greenest cities in the Middle East due to their proximity to the Caspian Lake, moderate climate, and abundant rainfall. Many tourists from inside and outside the country travel to these cities every year. Meanwhile, Lahijan is one of the most amazing cities in the northern region of Iran due to its history and unique beauty.

Previous postFerdows, The Paradise of Persia
Next postFilband village, The sea of ​​clouds