Iran’s deserts lie on a plateau and are surrounded by interconnected mountain ranges. In the geography of Iran, there are two famous deserts in two major areas: Dasht-e Kavir and Dasht-e Lut, which are among the driest and perhaps the hottest areas in the world.

The largest desert in Iran

Dasht-e Lut is one of the largest deserts on the Iranian plateau and one of the only ones in the world, made up of layers of earth, sand, dunes, and Kalut.

The maximum annual rainfall in this region is about 100 mm and its average height is 600 meters above sea level. Geologically, the other Iranian desert called Dasht-e Kavir is located north of the Lut desert. The minimum height of Dasht-e Kavir is 400 meters above sea level. Most of the desert plain is covered with sand and is exposed to strong winds and storms that move the sand mixed with salt like a wave of the sea. Over time, this phenomenon has led to the rise of high hills that reach up to 40 meters in height.

Environmental conditions of the deserts of Iran

Some of the environmental characteristics of Iranian deserts are intense insolation, relatively low humidity, low rainfall, and high evaporation. The temperature varies as a function of the distance from a point to the heights. In regions far from the heights, temperatures can reach 60 degrees in summer. Average temperatures between January and May are 22 and 40 degrees, respectively. In general, the environmental conditions of Iranian deserts are so harsh that they are not tolerable in either summer or winter.

It rarely snows in this region. Relative humidity is less than 30% per year. In summer, the humidity decreases and sometimes reaches 0%. In winter it rains often and sometimes a lot, eroding the land. As the deserts of Iran are often exposed to the wind, there are not enough plants to protect it and the wind causes erosion. For this reason, the inhabitants use wooden walls and plant bushes and trees to block the wind and fight against the destructive forces of nature.

Conditions of living in the deserts of Iran

Water is always considered a vital element that enables living conditions anywhere, as well as providing suitable conditions for plants to grow and for people to reside in the desert. However, water is not available in all areas of the desert.

Life flows in areas where there is water in springs that are accessed through an ancient underground channeling technique called Kariz. The locals use animals that have a high tolerance to travel and traverse the desert. In the deserts of Iran, most plants have roots deep in the ground to survive.

Housing and clothing in desert areas

Raw clay, raw mud and, in some areas, a limited number of stones are used as building materials for houses. The walls should be thick enough to serve as insulation, and the ceilings should be rounded or arched to last longer. People usually wear light colored cotton clothing. Their clothes are loose and long, and some people wear different clothes due to the influence of urban culture. Although the Iranian plateau imposes its own living conditions, the inhabitants try to maintain them. These hardworking people, who have tried to live in the desert for thousands of years, are more resistant than giving up easily.

How to travel through the desert

If you have not yet traveled through the desert, you should know that this trip is capable of bringing you new experiences and emotions.

By keeping the following points in mind, you will be able to safely travel through the deserts of Iran.

To travel through the desert, you have to walk very slowly, not expending all your energy in the first hours.

Do not eat in abundance during the walks, but make small sandwiches with simple and light but caloric foods, such as dates, dry bread, nuts, etc.

Start exploring the desert in the morning and stay in the shade in the afternoon, except in winter and at low temperatures.

In the case of spending more time in the sun, increase the amount of high protection sunscreen and cover the body with cotton or linen clothing (light colors). It would be preferable not to wear tight pants and shirts to allow the skin to breathe and balance the body temperature according to the level of perspiration.

Cover your head and neck, wear a hat in the shade, and wear sunglasses.

Rest between each round and regain energy to continue the journey.

Follow the guide if you are not familiar with the desert. If for any reason you are late and walk slowly, you must notify the guide before getting lost.

Avoid traveling alone in the desert.

Have a map with you and a device to find the route. If your itinerary does not have a suitable camp or is not registered on the map, you will need to carry a tracking device, notify the local police before leaving, or be accompanied by a professional local guide.

Do not enter difficult and unfamiliar areas without a guide and a map during your first experiences in the desert.

Take the necessary precautions against animals that live in the desert.

During the second half of the year, the desert experiences its most pleasant and mild days. But the nights are cold, so you have to wear appropriate clothing for this time of year. 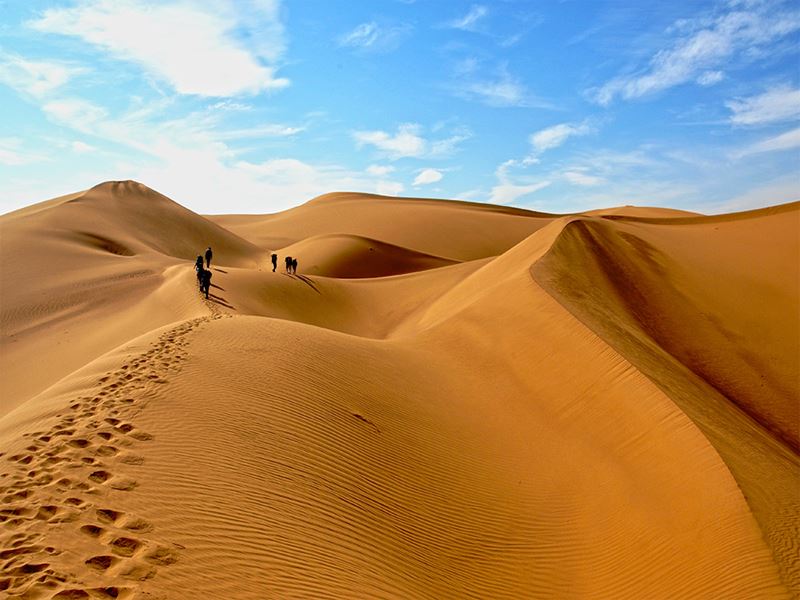 Abuzeid Abad Desert The Abuzeid Abad desert is a desert in the province of Isfahan located northeast of Kashan. At a distance of about eight kilometers from the city, there are flowing sand dunes; But to go to the largest and most beautiful hills, you have to travel the desert road and the salt lake 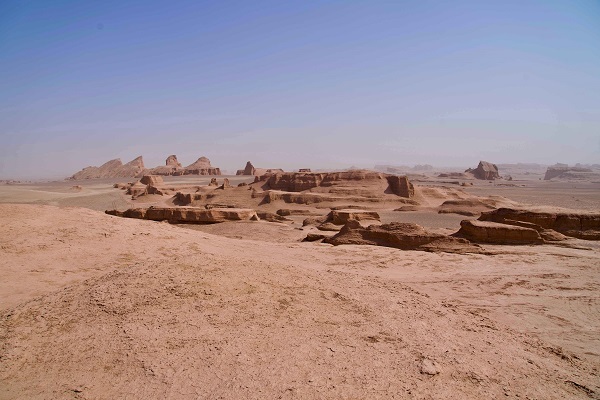 Dasht-e Kavir Dasht-e Kavir, also known as the Central Desert, is a vast desert about 800 km long and 320 km wide south of the Alborz mountain range. The Central Desert is the largest desert in Iran, stretching from the north to the central and eastern slopes of Alborz and from the west to the Karakal One of the deserts of Iran is Karakal, located in the central desert plain of Iran. The Karakal desert is located near the town of Sadeqabad, in the city of Bafq, in the province of Yazd. The altitude of this desert reaches 50 meters and covers an area of ​​more than 1500 hectares. The

Lut desert and its famous Kaluts The Lut Desert is located in southeastern Iran and benefits from a subtropical continental zone characterized by a rich variety of spectacular desert morphologies. Lut is surrounded by a buffer zone of 1,794,134 hectares, and in the Persian language ‘Lut’ means bare land, without water or vegetation. The area Maranjab The Marnjab Desert is one of the deserts of the Isfahan province that is located north of the city of Aran O Bidgol in Kashan. The flora and fauna of this region are very rich, so, in addition to the landscapes, you can see the various species present. The name of Maranjab comes from Matin Abad, ecological camp that respects nature Matin Abad desert, throughout the year, attracts the attention of desert lovers thanks to its natural camp in the middle of a magnificent landscape. The Matin Abad desert is located 25 km south of Natanz and 60 km southeast of Kashan. Renewable energy sources are used in the Reygan The Reygan Desert is part of the Lut Desert and is located in the extreme southeast of the Kerman province. The appearance of the sandstones in this desert is different from that of other deserts in Iran. The Reygan desert is light in color and the sand dunes reach a height of 75 meters. Varzaneh The desert closest to the city of Isfahan and the most famous in this province is called the Varzaneh desert. It is located 100 km east of Isfahan, 150 km west of Yazd and is surrounded by the city of Varzaneh and Zayandeh Rud to the north and the Gavkhuni wetland to the east.