Uramanat or Oraman is an attractive small city in the west of Iran, which is located in Kurdistan province, 150 km west of Sanandaj and 63 km south of the beautiful city of Marivan. Hawraman Takht is the center of a unique rural area with special culture and customs, lingo and a natural structure named Oramanat or Hawramanat. In terms of country divisions, Hawraman Takht is located in SarvAbad city of Kurdistan province. Hawraman Takht has attracted the attention of tourists from all over Iran and the world because of its natural and cultural features, every year a large number of tourists visit Hawraman Takht and Hawramanat region.

In terms of natural structure, Hawraman Takht stands like the city of Masouleh in the north of Iran, on the slope of a high mountain and is built in a stepped manner. In Hawraman, the rooftop flat is considered as an upper house’s yard and the alleys have a high slope and are often constructed in the form of stairs. The materials used in the construction of the houses in this area are created of natural materials such as stone and wood, and most of the walls are assembled of porcelain stoneware. Uramanat  has an ancient history, according to evidence, the history of settlement in this area goes back thousands of years. So, Hawraman Takht people own rich and unique culture and art, clothing and customs, they have been less exposed to the changes and transformations of the historical periods of Iran and the world. This is the reason for the preservation of pristine culture and traditions. For this reason, in 2021, the UNESCO World Organization registered the cultural landscape of Hawramanat in the list of human heritage. According to the definition of the World Heritage Committee, cultural landscape encloses those cultural properties that represent the joint work of man and nature and show how the cultural patterns of the inhabitants of a region influence the specific geography of that land.

Population and anthropology of Uramanat

In 2016, Hawraman Takht had a population of about 3200 people. The people of this region speak the Kurdish language, the Hawrami dialect, which is rooted in the ancient languages of Iran. Hawraman Takht people are hardworking people and to make a living in the steep mountainous area, they have created flat lands for agriculture by stacking stones and creating platforms together, and cultivating agricultural products in them. They are very kind, warm, and hospitable and welcome tourists and guests beautifully and warmly. 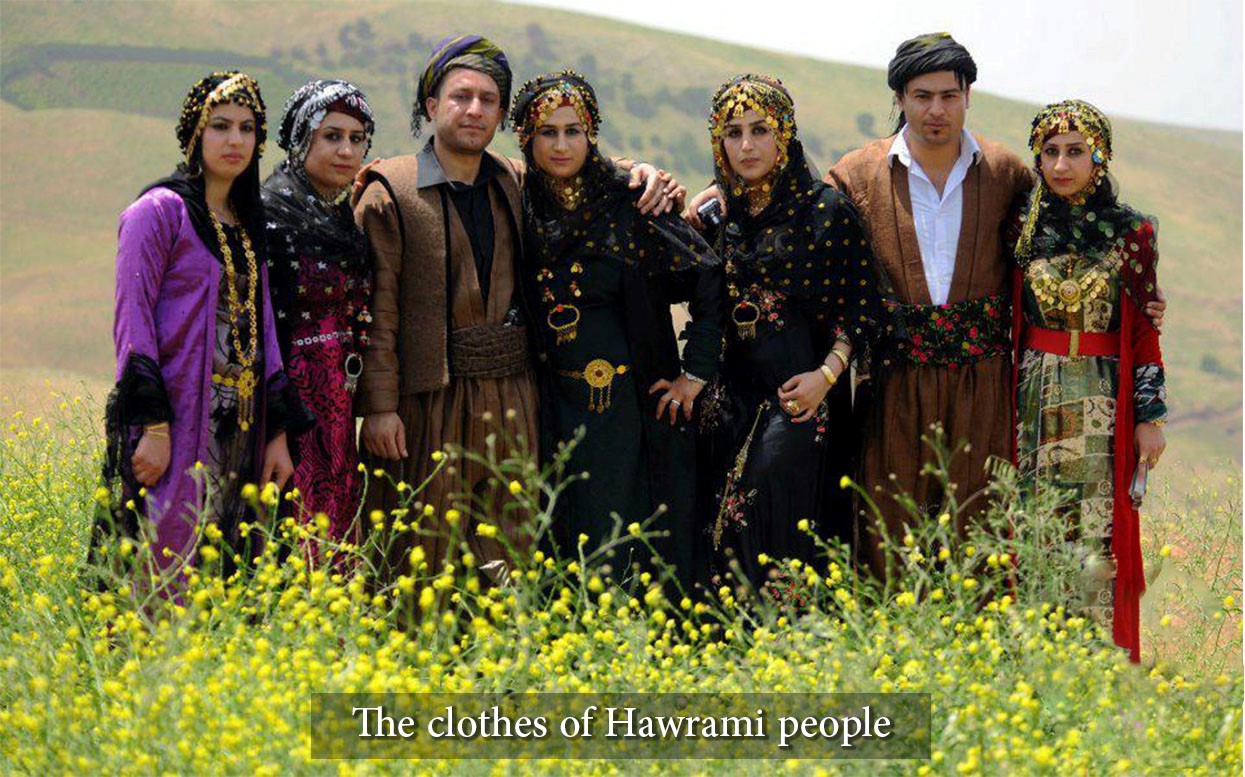 Uramanat is formed in a mountainous and inaccessible region and has high mountains, grasslands, and unique landscapes that are rare in the Middle East. Hawraman is one of the places where all four seasons of the year occur and each season has its beauty. The climate of Hawraman is cold and snowy in winter and warm and moderate in summer. The springs and rivers of this region are very beautiful and full of water, and they flow through the valleys of this region. One of the strangest springs in this area is called Kani Bell or Bell Spring, which gushes out about 4000 liters of water every second. Zaribar lake near the city of Marivan is another natural attraction of this region, which is one of the largest freshwater lakes in the world. Hawraman has rich flora and fauna and all kinds of medicinal plants grow in it. Also, this area has a beautiful forest cover, most of its forests are composed of pine and oak trees. The people of this region produce a kind of natural gum called turpentine from the sap of the Bene tree, which is very useful and delicious and is considered one of the souvenirs of this region. Uramanat was considered one of the inaccessible areas in the west of Iran due to its special physical and natural structure. For this reason, the people of this region have been self-reliant in meeting their needs, and this has led to the boom in the production of handmade objects and tools in Hawramanet. Hawraman people have special shoes and clothes that are unmatched anywhere in the world. People’s shoes and clothes are produced from the wool of sheep and goats they raise. Hawrami shoes, known as Kilash, are woven from yarn and fabric with a hook. The fabric used for sewing Hawrami clothes is also woven from the wool of Maraz goats, which are native to the Hawramanat region. Other handicrafts of this region include wooden dishes and spoons and forks, blacksmithing tools, felt and mats, which are used daily in the daily life of the people of Hawramanat.

As mentioned at the beginning of this article, Hawraman Takht city and the Uramanat region have a special architectural style, and this is due to its topographic and mountainous structures. Rural houses in this area are built on the steep slopes of the mountains like stairs. The stepped structure of the villages offers a beautiful and unique perspective of a rural settlement that is rare in the world. The materials used for the construction of these houses are stone and wood from the same region, the walls are extraordinarily flawless, also these buildings have been stable for thousands of years. 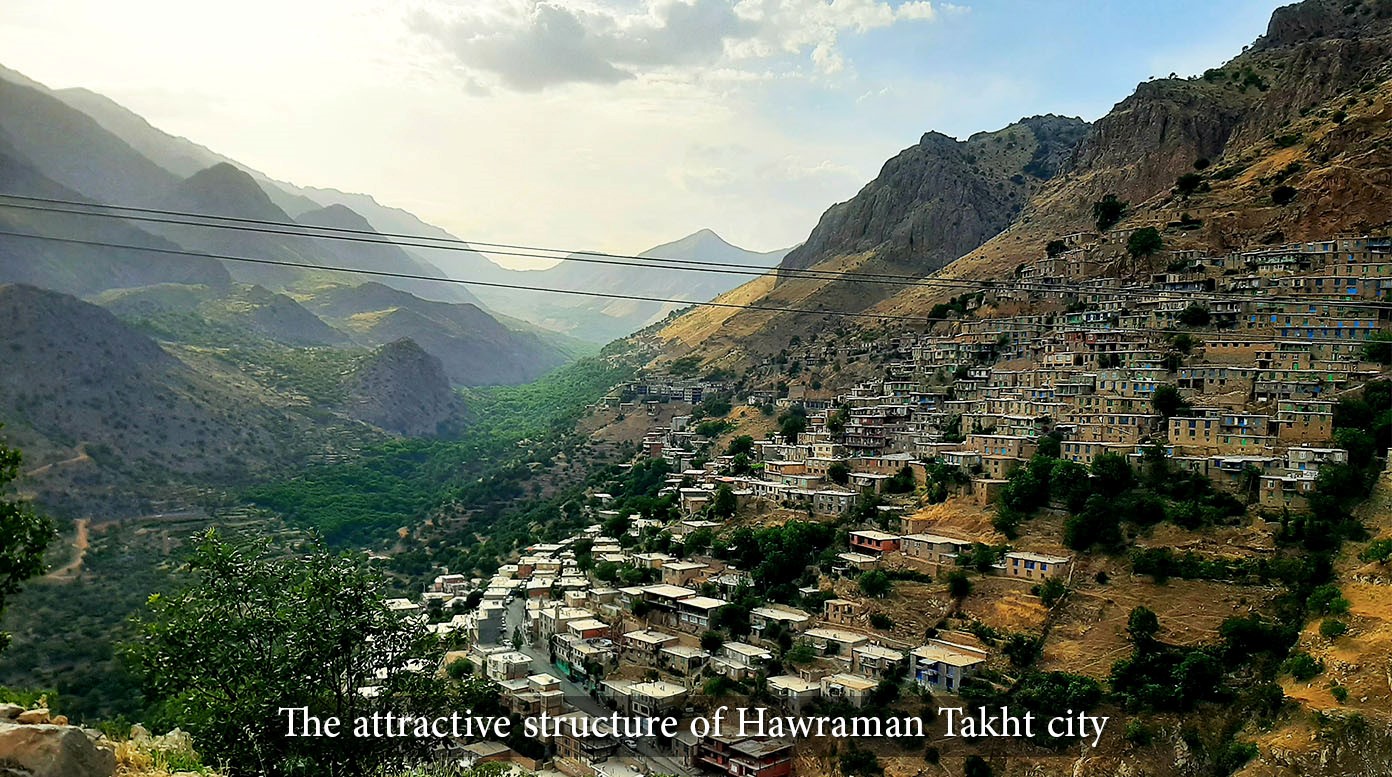 Uramanat is the center of production of products such as walnuts, berries, pomegranates, and grapes in Kurdistan province and western Iran. Apart from the direct supply of these products, the products produced by them are very popular and famous. Pomegranate paste, raisins, berry juice, grape juice, and various dried fruits are products that are very tasty and nutritious and are produced and offered organically in Hawramanat.

The native foods of this region are also natural and organic and have a very good taste. Among the dishes of Hawraman Takht, we can mention Ash Dough, Kalaneh, Tarkhineh, and Hatimcheh.

First of all, it should be said that Uramanat city itself is the most important tourist attraction of this region from the beautiful west of Iran. Uramanat is a unique city with a rural background that has a stepped structure and the beautiful views of this village surprise every tourist.

The nature of Uramanat region

Uramanat region and the city of Hawraman Takht have always been famous for their beautiful nature and pleasant climate. This area has colorful and wonderful landscapes that surprise tourists every moment. The rich vegetation and forest and its combination with mountains, rocks, and rivers with water present a special effect of the beauty of nature that steals the heart of every viewer.

Pir Shaliar is one of the identity elements of Hawraman Takht city. Pir Shaliar was a scholar who is said to have lived in this area in the era before Christ and was one of the elders of the Zoroastrian religion. But according to some others, Pir Shaliar lived in the period after the arrival of Islam and was one of the Islamic mystics. According to the people of the Uramanat region, Pir Shaliar has some extraordinary abilities; For example, in the culture and oral history of this region, it is said that he healed the blind daughter of Bukhara’s king, princes Bahar Khatun. To commemorate Pir Shaliar, two ceremonies are held every year with special customs. The first ceremony is held at the beginning of May and the second ceremony is held at the beginning of February, and it includes the slaughter of the sacrificial animals, playing the tambourine, spending the night, and praying. The people of this region call this, the wedding ceremony of Pirshalyar. During this ceremony, thousands of tourists from all over the world and Iran travel to Uramanat and witness this ritual ceremony closely.

Nowruz ceremony, which is the beginning of the solar new year in the Nowruz region, has a special value among the Kurdish people, every year this ceremony is held in some villages of Hawramanat region with special splendor, and it includes poetry reading, music, fireworks, plays local games and Kurdish dance. 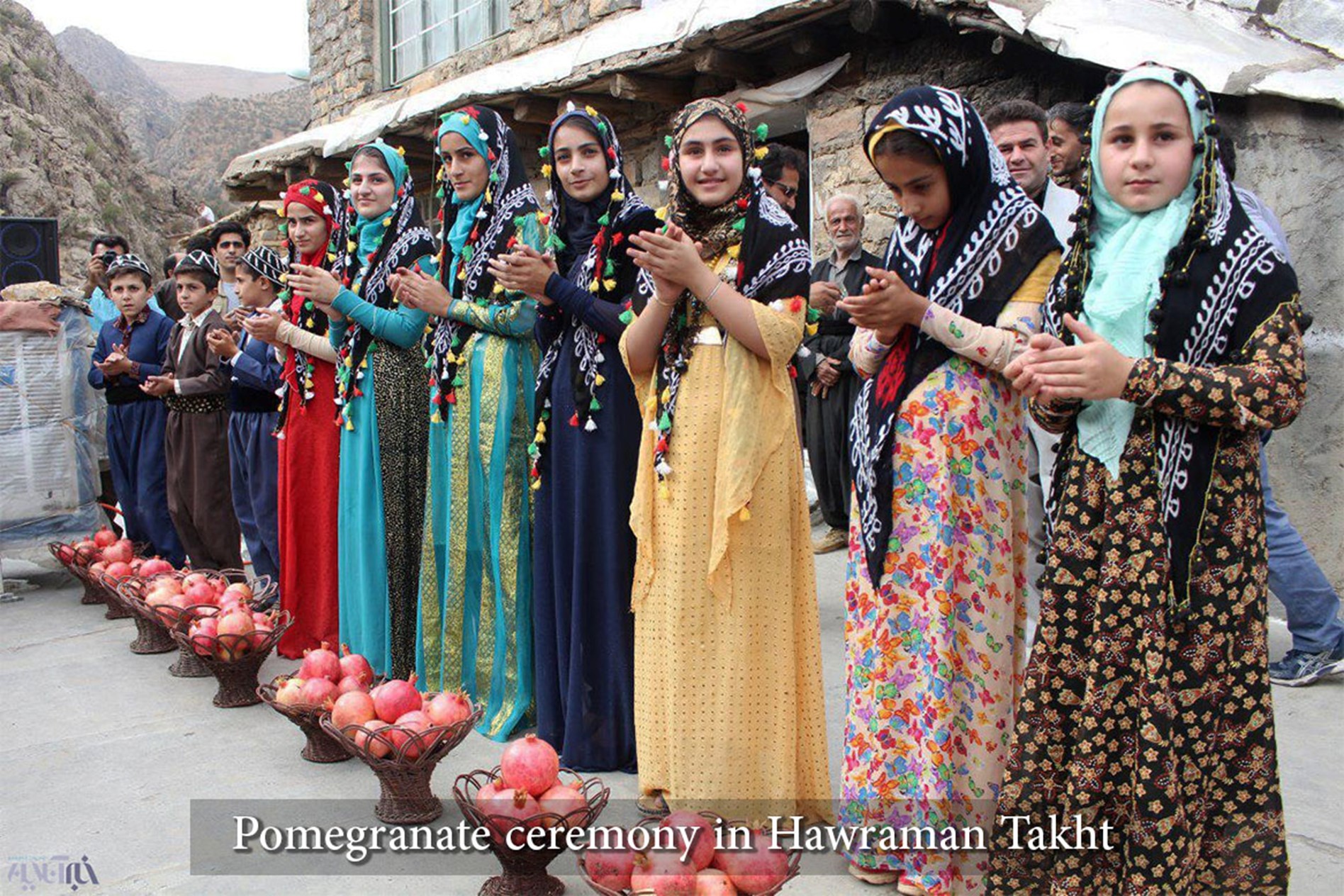