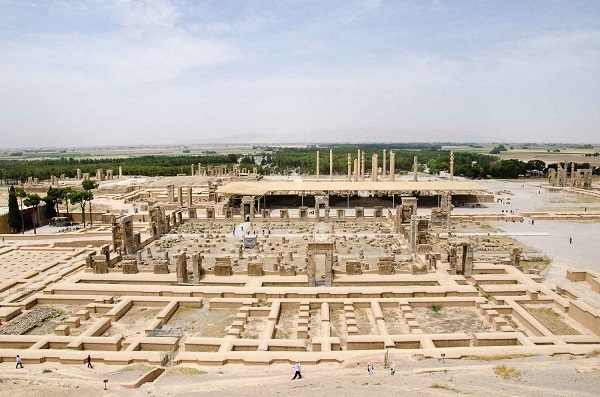 Persepolis is one of the largest and most spectacular monuments of Iran that used to be the capital of the Achaemenid kings for hundreds of years. Persians call it Parseh and the ancient Greeks used to call it Persepolis, which means the city belonging to the people of Pars. The construction of Persepolis began 2500 years ago at the time of Great Darius, and kept going for 120 years by successors and kings after him. Persepolis is 125 thousand square meters, built on a platform with a height of 8-18 meters. There are rocks in the building of Persepolis, weighting more than 250 tons. According to some discoveries, these rocks had been extracted of mines and transferred to Persepolis. From all nations; such as Iranians, Egyptians, Babylonians, Greeks, Elamites and Assyrians, people came to help in construction of palaces of the Achaemenid empire. In the past, it was believed that workers and engineers working in Persepolis were taken without getting paid, the same case as the Pyramids workers in Egypt. But later, with the discovery of tablets, stone inscriptions and scrolls that were some sort of an account, it was found that women and men who participated in the construction of Persepolis, in addition to enough salary, had advantages and insurance. Additionally, women had the right of maternity leave. From the inscriptions of Persepolis, it can be deducted that during the reign of the Achaemenids, all nations were treated in the same way so that in the images carved on Persepolis, there are not any scenes of war or cruelty of king and no one is in prostration or sad. On the other hand, it represents solidarity and friendship among various ethnic groups and Iranian kings. Persepolis includes a number of palaces such as:

In 330 BC, Alexander the Macedonian attacked Persia and set fire to the palaces of Persepolis, so that there was no nothing left of glory except the ruins, pillars and stairs. Persepolis was recorded at UNESCO World Heritage List in 1979. 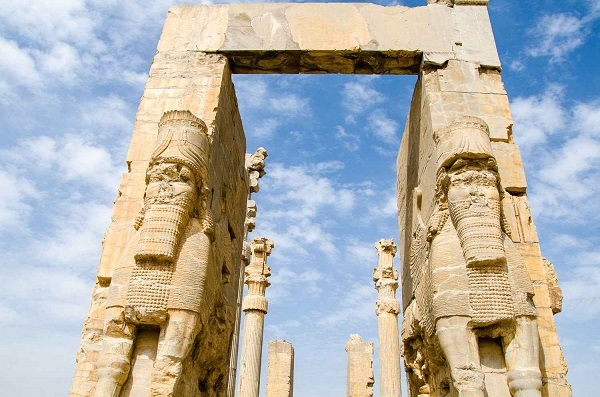 The Gate of All Nations or Xerxes Gate

At the head of the staircase, after passing 111 wide stairs; we arrive at the Gate of All Nations, which is the entrance gate to the Persepolis. Anyone entering Persepolis, must do so by this gate. Each side of the monumental entrance is 25 meters long and stands on 600 square meters of land. Two of the four-meter-high columns have survived. In this direction, designs include angel men and two cows with a human head and six inscriptions written with a cuneiform rendered in the three main languages of the realm: Persian, Babylonian an Elamite. This palace is one of the oldest palaces in Persepolis, which is 12,000 square meters, and was built on the orders of King Darrius to hold New Year celebrations and meet with representatives of various nations. The palace has two rows of entry stairs and walls with 80 meters length. On these stone walls, there are the wonderful bas-reliefs to showing the pictures of Achaemenid soldiers, heads of the government and gifts of the 23 nation envoys donated to the king. There are some people as a guide who have taken the hand of guests of various nations as a sign of hospitality, and in the middle of the stairs there is a King’s image holding a cane in one hand and lilies in the other, which is a sign of peace and friendship for envoys of various nations. On the stairs of the other side, there are pictures of the military commanders of the Medes and the Pars, whose hands are holding lilies as a sign of peace and friendship. The palace has 72 columns, each measuring about 20 meters in height and 90 tons in weight. On the top of each pillar has been installed a sculpture of double-headed cow or double-headed lion. 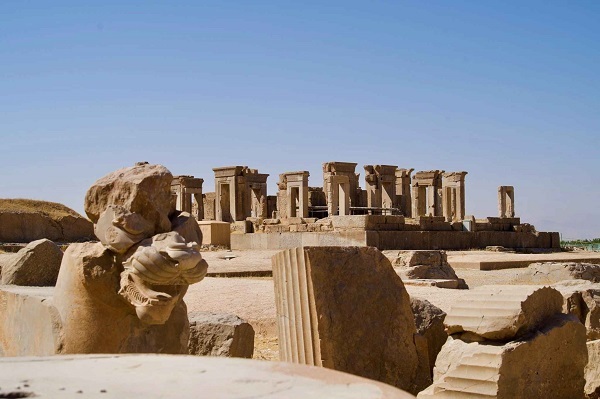 The palace was also built on the orders of King Darius. On the inscription found in this place with a cuneiform script, had been carved “I Darius made this Tachar”, just like on other special palaces of Darius. Tachar, meaning Winter Palace, in the name the king chose for his private residence. Tachar Palace is approximately 30 meters wide and 40 meters long, built on 1,160 square meters of land, and 12 columns supported its ceiling. In this palace there are many inscriptions written in ancient Persian calligraphy and even Pahlavi calligraphy. It’s known as the Calligraphy Museum.

This palace, the highest palace of the complex, was built on the orders of Xerxes and Hadish. This place was his private palace and its name is derived from his second wife’s name. From this palace there are stairs that connect the Tachar Palace directly to the Queen’s Palace. According to the evidences the burning of the Persepolis began from this palace because king Xerxes burning the Athens.

This palace was built at the time King Xerxes, ordered by him for his queen. The palace is located at a lower height than other palaces. Now it has been using under the title of museum. 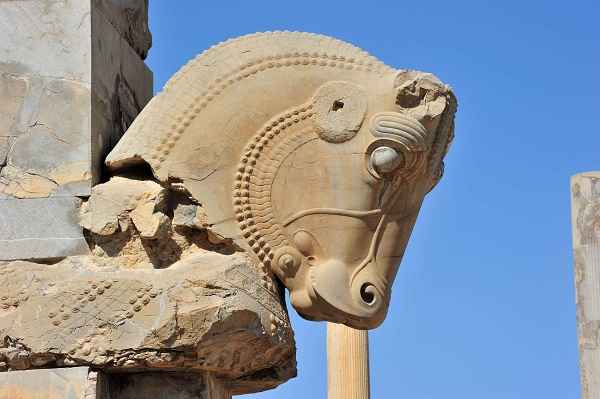 The palace has an area of ​​45,000 meters, and the reason for naming it is the existence of 100 pillars at a height of 14 meters supporting the ceiling of the palace. When it was excavated in 1878, this hall was buried under 3 meters of soil and cedar ash. The entire palace originally contained a hundred 14-meter long columns, constructed in ten rows.

Considering the images carved on this place and the presence of two statues of human heads that are symbol of thought, making it so unique and not found in other palaces of Persepolis, it is probable that kings used to hold their meetings with the heads of the country and military commanders there to discuss and consult issues, which is why it is called the council palace.

The treasury, the place of collecting gold, ornaments and trophies of kings, was built under the command of King Dariush, and Xerxes ordered one part to be removed. Although it was plundered by Alexanderis army, then burned, recent excavations have yielded some valuable aircrafts in addition to clay tables stone ports mortars, moos-stone plates bearing Aramaic scripts, statues and large caches of weapons have been unearthed at the site. According to the records of ancient Greek historians, Alexander the Macedonian after attacking the Persepolis and burning it, took all the gold and valuable possessions of the Achaemenid kings in the treasury with 3000 camels and horses. 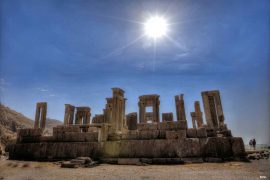