15 of the most popular and delicious Iranian food

15 of the most popular and delicious Iranian food

Iran is a country with a long history that has delicious foods that are just as old. These dishes are also famous in different countries and are served in many restaurants outside Iran. Here we review 15 favorite and trendy dishes among Iranians and other nations.

Traveling to Iran leads to getting to know very delicious foods. Among the delightful kebabs and grilled lambs, we can mention other foods such as caviar, pickles, and smoked fish in this country, samosas, falafel, and sour shrimp in the south, and all kinds of noodles, sweets, and ice creams with the taste of rose water all over the country.

Looking at the geographical location of Iran, you will quickly understand why there are so many different foods in this country. Once the center of the Persian empire, Iran is in the neighborhood of the former Soviet Union and countries such as Afghanistan, Pakistan, and Turkey. Also, this country is located in the Middle East and is close to Europe. It is far from Africa, and this country also has the Silk Road.

Many food and fruits, such as pistachios, almonds, walnuts, saffron, mint, pomegranates, and grapes, have Iranian roots. Iran has four seasons, and unlike other parts of the Middle East, , arid and desert areas of Iran have been turned into oases for a long time using underground water and melted snow. In them, all kinds of Various plants and fruits have grown.

Sito Travel has tried to select iranian food in this list according to factors such as authenticity, health, popularity, and taste, which are compatible with the different flavors and temperaments of people worldwide so that everyone can enjoy eating these foods. So stay with us to learn about these healthy and delicious foods.

Kebab is more diverse than you think in Iran. The first type is pounded kebab, made from minced meat with chopped onions, salt, and pepper. It looks simple but tastes great. Kebab Barg is another type of kebab made from pieces of lamb or veal, to which saffron and butter are added. Grilled chicken, which is called chicken, is prepared by grilling a whole chicken with all the bones, and it is marinated in lemon juice and onion to make it tasty, and its surface is covered with saffron and butter. If you are lucky, you can also eat Jegar. Jegar is grilled lamb’s liver served with fresh basil and lemon. Qorme-Sabzi is made from vegetables, red beans, and lamb; this dish is sour and full of herbs. Cooked vegetables are flavored with dried lemon, which is called Omani lemon. These lemons are sour, and with a bitter and sweet taste, they give a different taste to the vegetable. Parsley, coriander, fenugreek, and chives can be mentioned among other vegetables used in Qorme Sabzi. Usually, Qorma Sabzi is served with cooked rice. 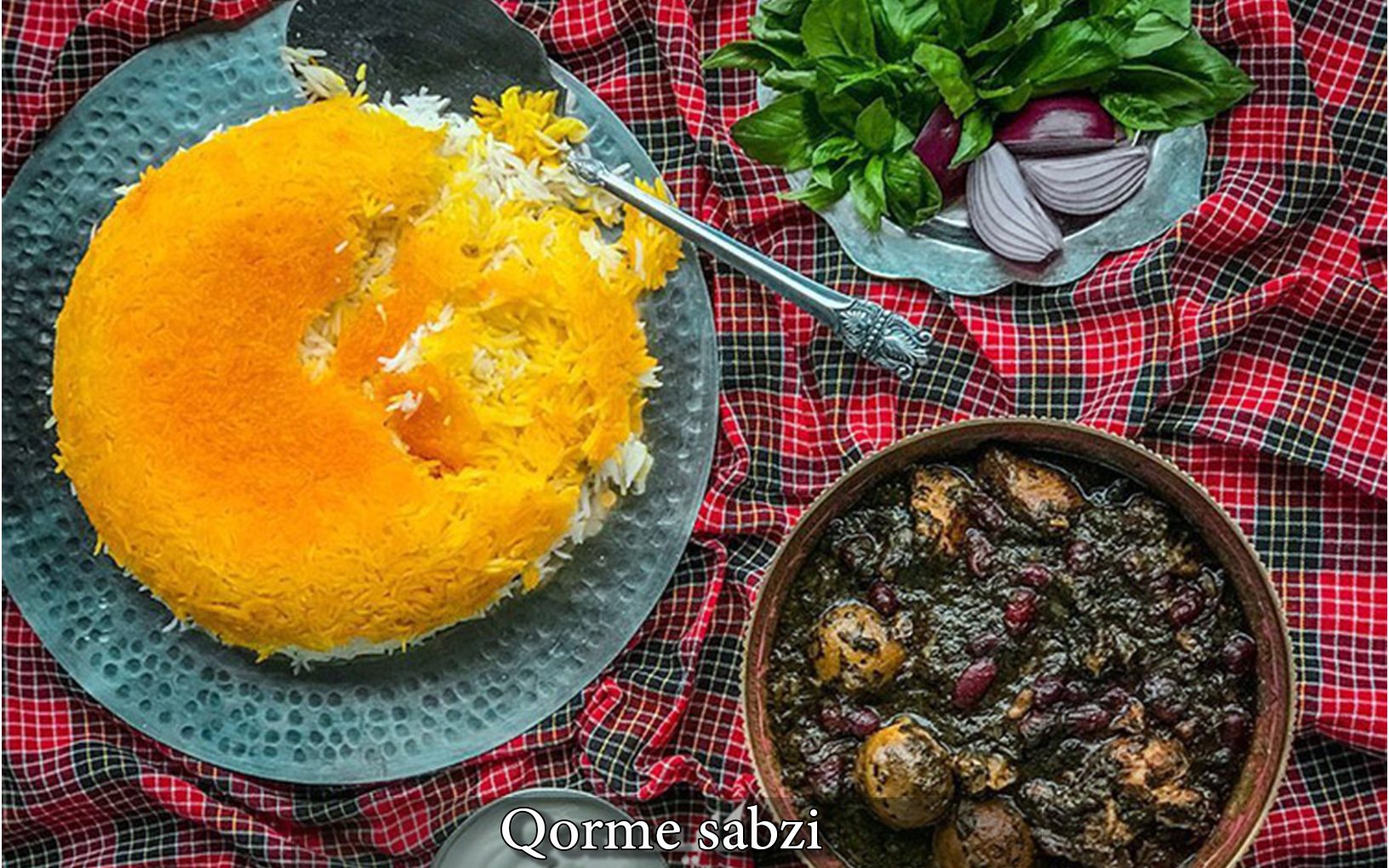 Iranian people love sour flavors, and barberry, which has a red color, is very sour. A traditional brass dish is filled with rice, the surface of which is covered with barberry. This rice is cooked with butter, which helps a lot to soften the barberry. Beh, rhubarb, green tomato, sour orange, lemon, Omani lemon, cherry, sumac, and pomegranate are the ingredients used in Iranian dishes that give them a memorable and delicious taste. Zereshk-polo is usually served with chicken meat and a thick sauce made from the tomato paste and some spices. 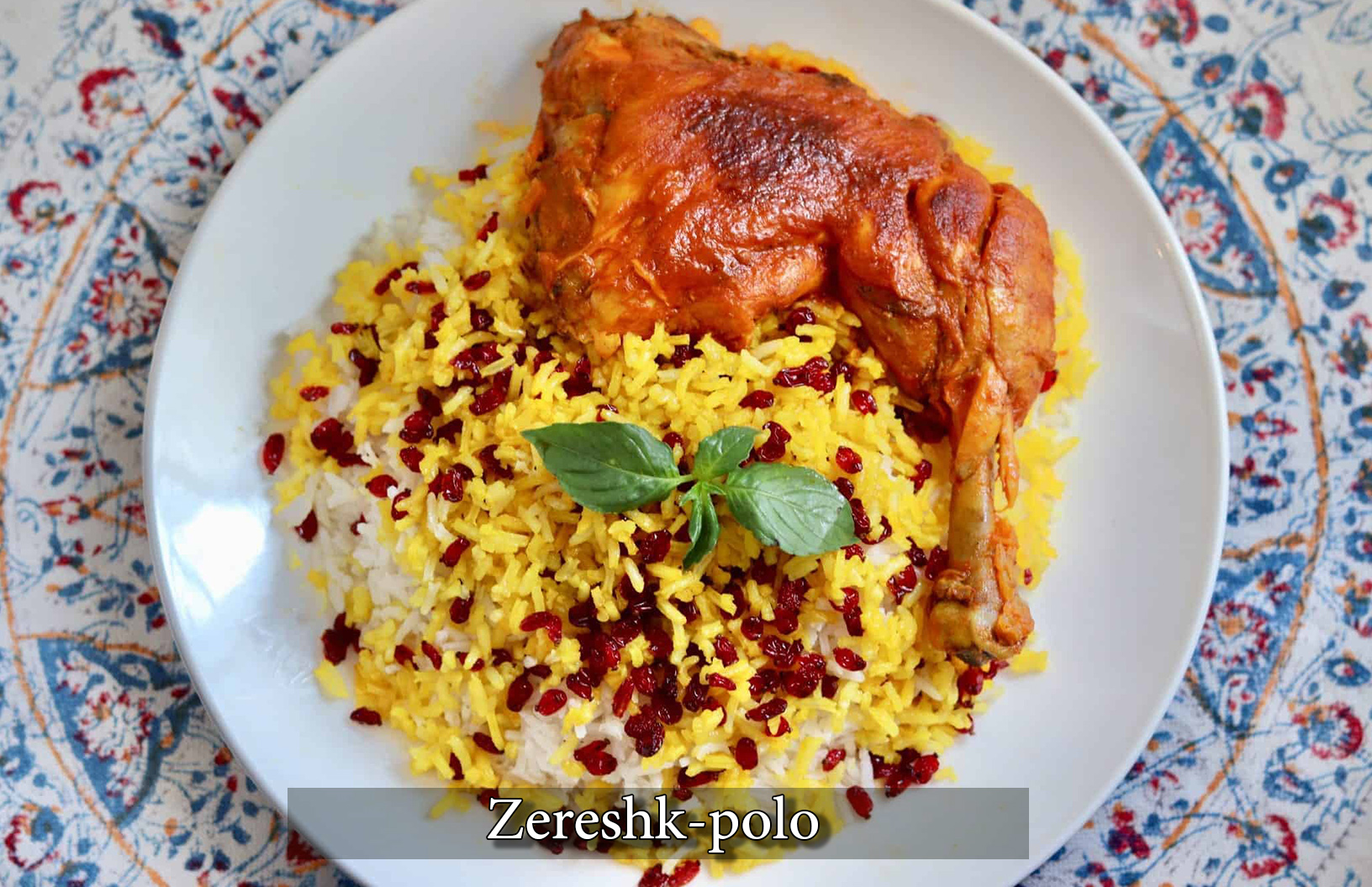 Fesenjan is a traditional and typical food among Iranian people, it is made from sour pomegranate seeds along with chicken or duck meat, and it must be on the menu of many restaurants. Walnuts, pomegranate paste, and onions are slowly simmered together until a thick sauce is obtained. Sometimes saffron, cinnamon, or a little sugar is added to reduce the sourness. Fesenjan is an old food. In the remains of Persepolis, the ancient capital of the Persian empire, archaeologists have found stone inscriptions dating back to 515 BC, which contain a list of Iranian foods. This list includes walnuts, chicken and rooster meat, and pomegranates, the main ingredients for cooking Fesenjan. Fesenjan stew is also served with rice and fresh vegetables. In Iranian cuisine, rice can be cooked with butter and saffron, called Chelo, and it can also be cooked with other vegetables, called pilaf. Rice can be the main part of the meal, along with herbs, vegetables, beans, nuts, dried fruits, meat, and even noodles. The best time to cook beans is spring when beans are young, and dill is fresh. This dish is full of dill and beans and is usually served with thin slices of lamb. And it is even served with bone-in lamb. The rice should taste saffron by adding saffron just before serving. Vegetable pilaf with fish is a dish Iranians cook annually during the Iranian New Year. This dish is made from rice and fish. This dish, like Qormah Sabzi, includes different cooking recipes, which are different according to the region and its cooking method. For example, in the north of Iran, they fry fish with fresh lemon juice and saffron, while in the south of the country, they cook fish stuffed. If you like to taste the good taste of fish and a bowl of authentic Iranian rice, Sabzi-polo ba Mahi یا Vegetable pilaf with fish) can bring you a memorable taste. 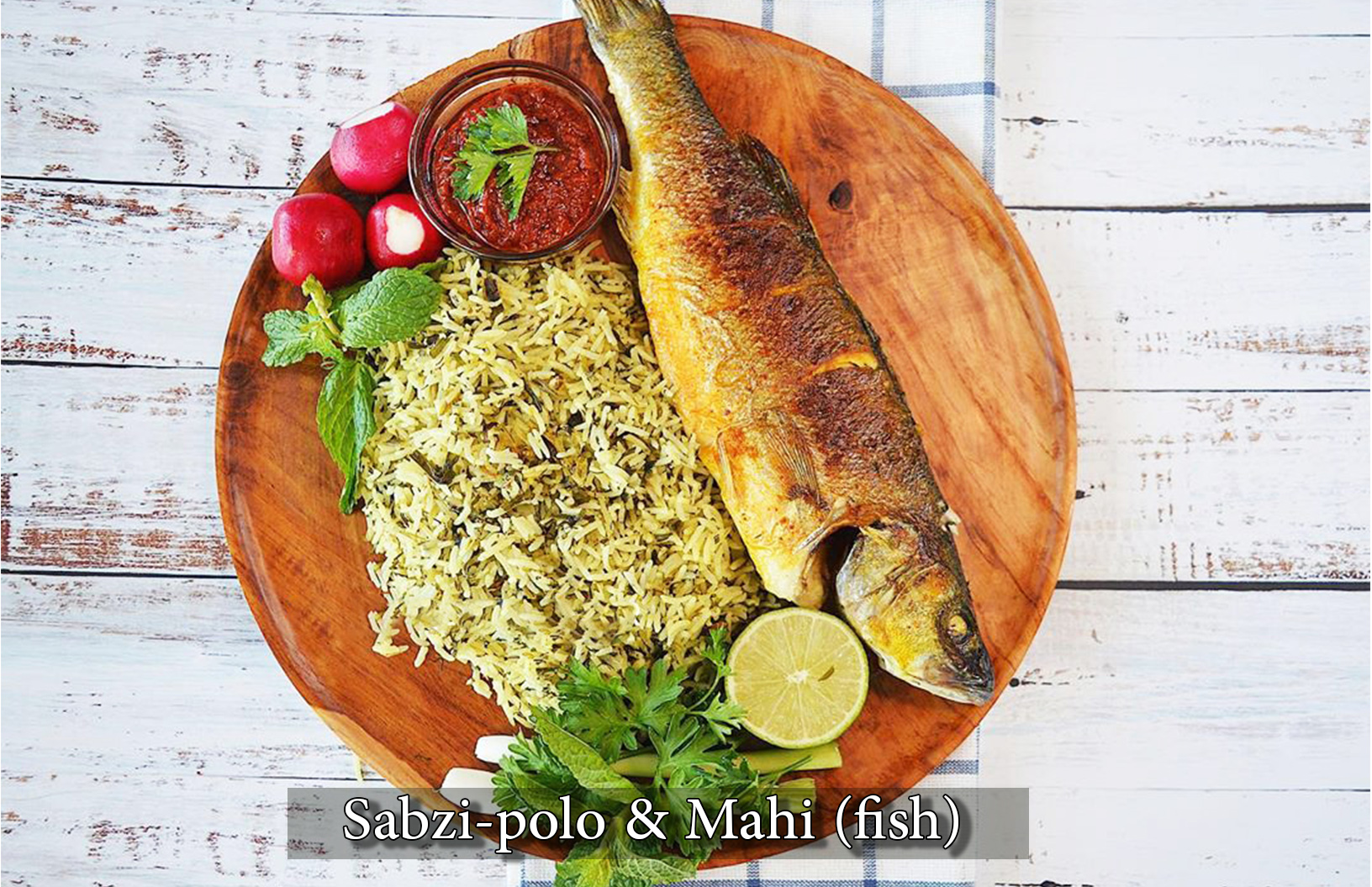 This dish is made with tomatoes roasted with turmeric, which is red and golden. The top surface of the tomato is covered with oil. This oil on the food is considered a positive point in Iranian cooking, indicating that the food is sufficiently cooked. This dish, which has a slightly sour taste, is served with tomatoes, lemon syrup,verjuice, and eggplants that have already been fried, turned golden and brown and cooked with onions and lamb. Like all Iranian dishes, the pieces of eggplant in this dish are thick and should be eaten with rice and using a fork.

Morasa-polo is a type of rice on which nuts and various fruits shine like jewels. It is a sweet and tasty food cooked using all kinds of Iranian nuts and fruits such as pistachios, almonds, sweet orange peel, barberry, carrots, and saffron. Morasa polo is used for special ceremonies. Mainly using this lovely food in the wedding ceremony is a sign of a sweet life in the future for the bride and groom. Morasa polo is traditionally served with chicken, contrasting with rice’s sweetness. 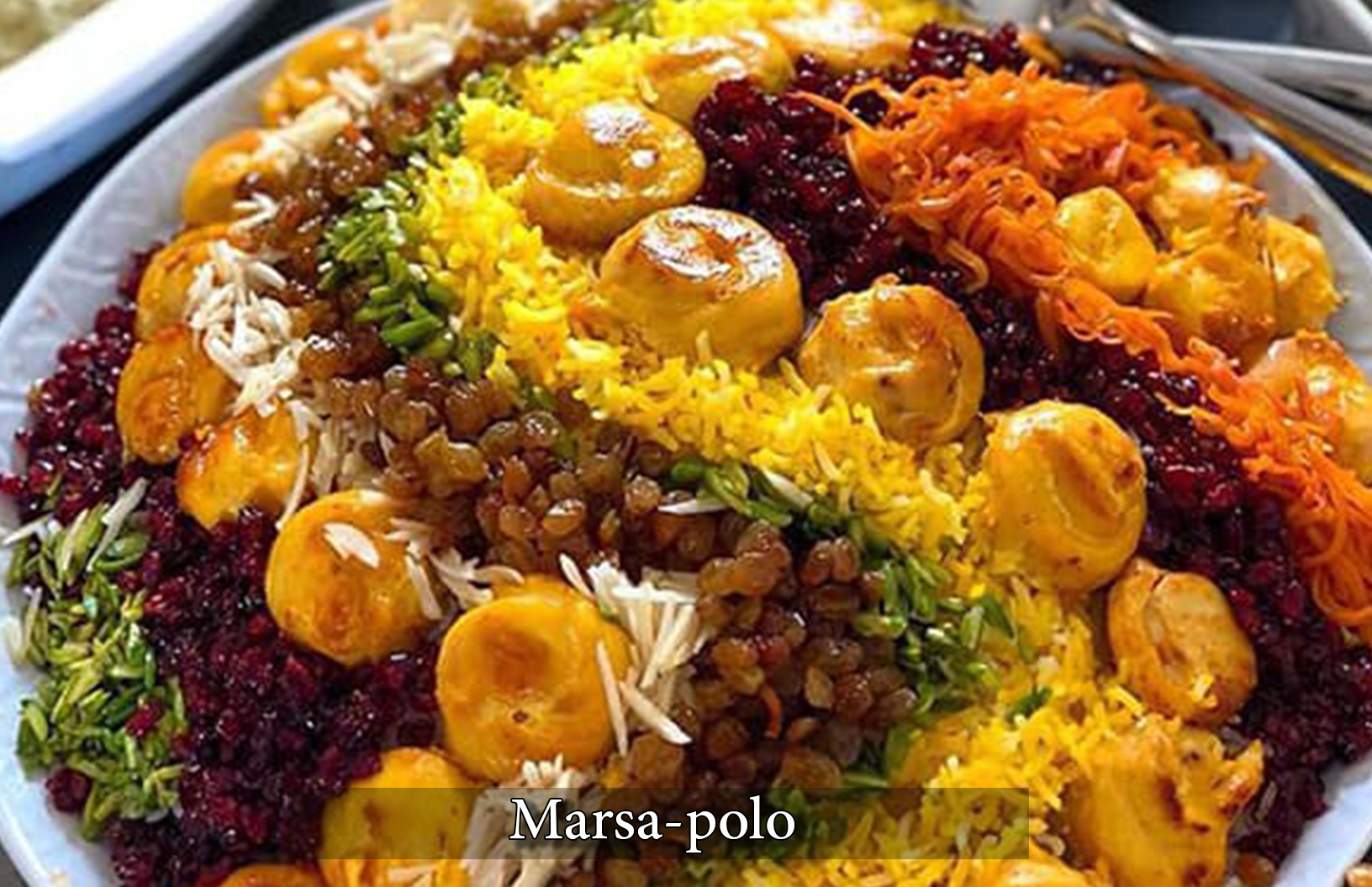 Tah-Chin includes rice, yogurt, saffron, eggs, and chicken fillet, placed next to each other like a compressed cake. You can also use vegetables, fish, or meat instead of chicken fillet. The content that is used for Tahchin is entirely up to personal taste. Tah-Chin is among the most beloved dishes that have gained many fans in Iran. Try to taste the delicious taste of this dish at least once. Dizi or Abgousht is one of the traditional Iranian dishes that is prepared from a combination of mutton, chickpeas, beans, potatoes, onions, and tomato paste. Broth, rich in protein, carbohydrates, and fats, which is accompanied by yogurt, onions, various pickles, and vegetables, is considered a complete healthy meal. Abgousht is served in traditional and beautiful dishes in many coffee houses, guest houses, and even luxury and non-luxury restaurants. Abgoosht, like other Iranian foods, is cooked with different ingredients and recipes in each region. Eating broth has its style and style, which is very interesting in its way. Dizi materials are separated from the water and crushed with an object called “gushtkub. Iranian daisy is served with Sangak bread, raw onion, fresh vegetables, pickles, and Iranian ayran or doogh. This soup contains noodles, beans, vegetables, and green leaves like spinach and beetroot—in addition to roasted mint, crispy fried onions and kashk for design. Sour kashk is a popular dish in the Middle East that tastes like tart yogurt. Noodles, which came to Iran from China, represent different and extended parts of life, and that’s why when someone goes on a long trip, noodles are cooked for him. It is also a dish cooked in Nowruz – Iranian New Year. Tabrizi meatball, as its name suggests, is one of the traditional dishes of Tabriz that is cooked in different parts of Iran today. Tabrizi meatballs are a combination of minced meat, split pea, rice and vegetables, which are mixed together and shaped like a ball. Ingredients such as boiled eggs, plums, walnuts, and roasted onions are usually placed inside the meatballs. Baqla- Qatouq is a type of garlic stew that initially comes from the northern provinces of Iran, such as Gilan and Mazandaran. This delicious dish consists mainly of fresh beans, eggs, and dill. It can be served with rice or bread, depending on people’s tastes. Grape leaves Dolmeh is one of the most popular and widespread Iranian Dolmeh. It is interesting to know that in addition to being served as a complete meal, Dolmeh is also served as an appetizer in some gatherings. Dolmeh is cooked in different ways in different cities of our country. In some cities, apart from the main ingredients of Dolmeh, ingredients such as barberry, yogurt and pomegranate paste are added to it. 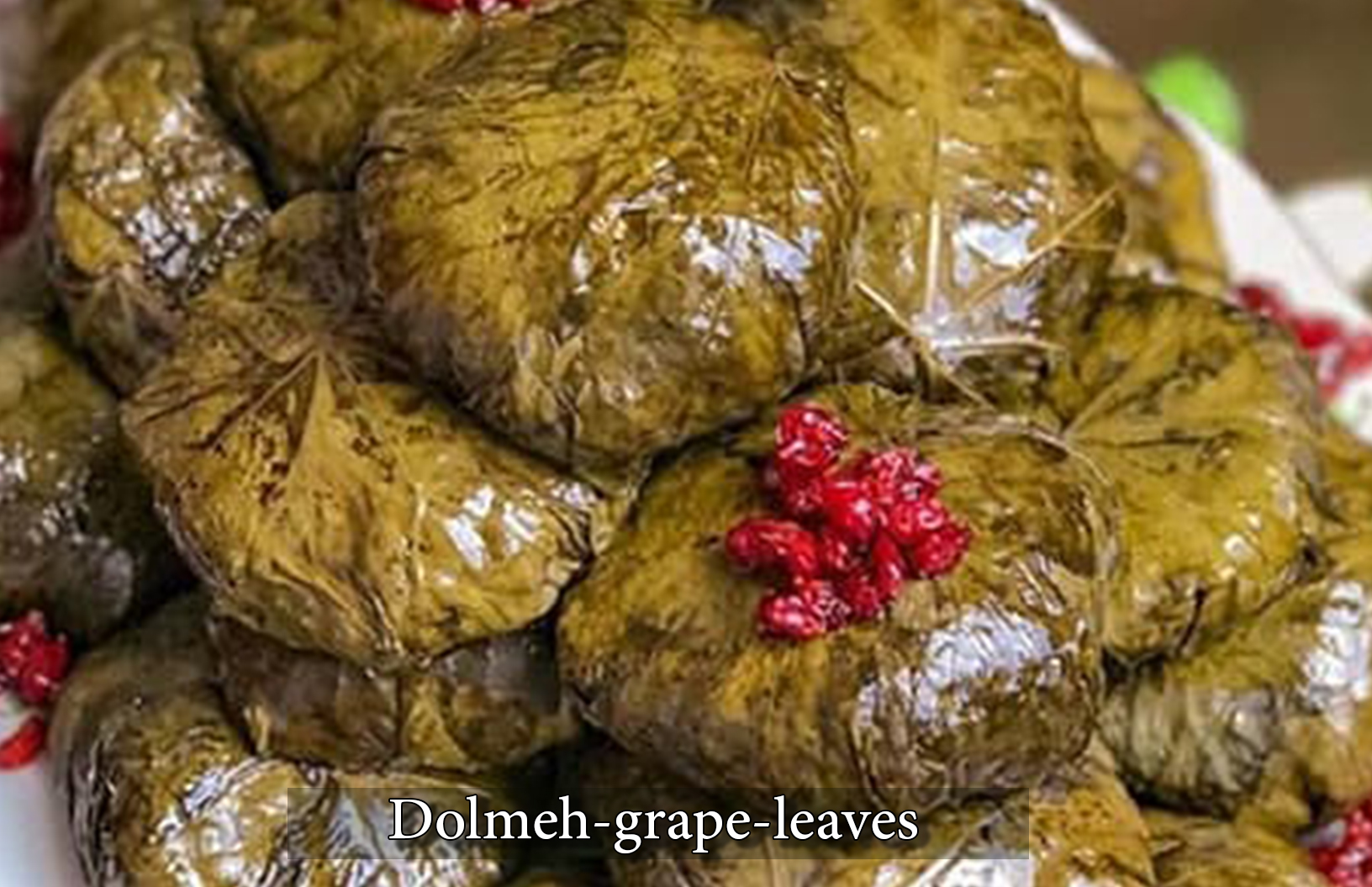 Kale-Pache is one of the traditional and trendy Iranian dishes that is usually served as breakfast. These delicious and nourishing foods are made from sheep’s head, brain, and legs. This food is very fatty; therefore, those with high fat should avoid this food. This dish is served with traditional Sangak bread, lemon juice, and vinegar. Eating offal will keep you full for several hours. Another point about this dish is that chickpeas are used in the home recipes of Kale-Pache, but restaurants make it without chickpeas.

In this article, we, the experts and tour leaders of Situ Travel, have examined the best dishes of Iran according to various factors and from the point of view of foreign tourists and introduced the top 15 dishes. Every corner of our dear country Iran has its own food culture. It has very high diversity, according to the taste of the region’s people and the available raw materials. Here we have mentioned only 15 famous Iranian dishes. Foods that are more famous and represent the food culture of our country in the world. During your trip to Iran, our tour leaders have chosen the best traditional and modern Iranian restaurants to serve you so that you will always have a memorable memory of the taste of Iranian food in your mind.

Rate this post
Previous post10 of the most important Iranian festivals
Next postPersian carpet, a symbol of Iranian culture, art, and authenticity