Introducing the city of Astara

Astara is the northernmost city of Gilan province, located on the border of Iran and the Republic of Azerbaijan. This city is located southwest of the Caspian Sea and north of Talesh city. It is a customs border and a commercial port for economic connections with Iran’s northern neighbors. The distance from this city to Ardabil is about 80 km, to Rasht is about 170 km and to Tehran is about 480 km. The customs facilities related to the import of Russian goods and the export of Iranian goods have been factors in the growth and development of Astara and its transformation into a city. The people of this city deal with commercial and customs work, especially in clothing, horticulture, rice cultivation, and fisheries.

Until the Qajar era, the entire Astara region was located in Iran. Still, in 1828, according to the Turkmenchai Treaty between the governments of Iran, a part of it called Astarchai was handed over to the Russian government, and this river was recognized as the border between these two countries.

Architecture and urban context of Astara

In the past, roof tiles production was widespread in Astara, and this city was known as the “City of Clay Roofs.” Clay was a good insulator against heat in the summer and acted as a windbreaker when strong winds blew, and it was easier to remove snow in the winter. Even in building some of the historical tombs of the region, which are more than 400 years old, pottery has been used.

This city is a mountainous region with a mild and humid climate. The proximity of Astara to the Hiran Valley and the existence of various mountains around the city have caused the air in this city to be generally cool, and the average annual temperature reaches 15.5 degrees. Also, Astara is known as one of the rainiest places in Iran.

International Estil Lagoon is located four kilometers away from Astara city. The ecotourism importance of this beautiful and fantastic wetland has doubled due to its proximity to the road and the variety of natural landscapes such as mountains, forests, fields, and farmlands. It is interesting to know that due to the location of the roots of the trees of this wetland in the water, they always move and move across the width of the lagoon. Estil Lagoon is usually one of the first sights to visit on an Astara trip. 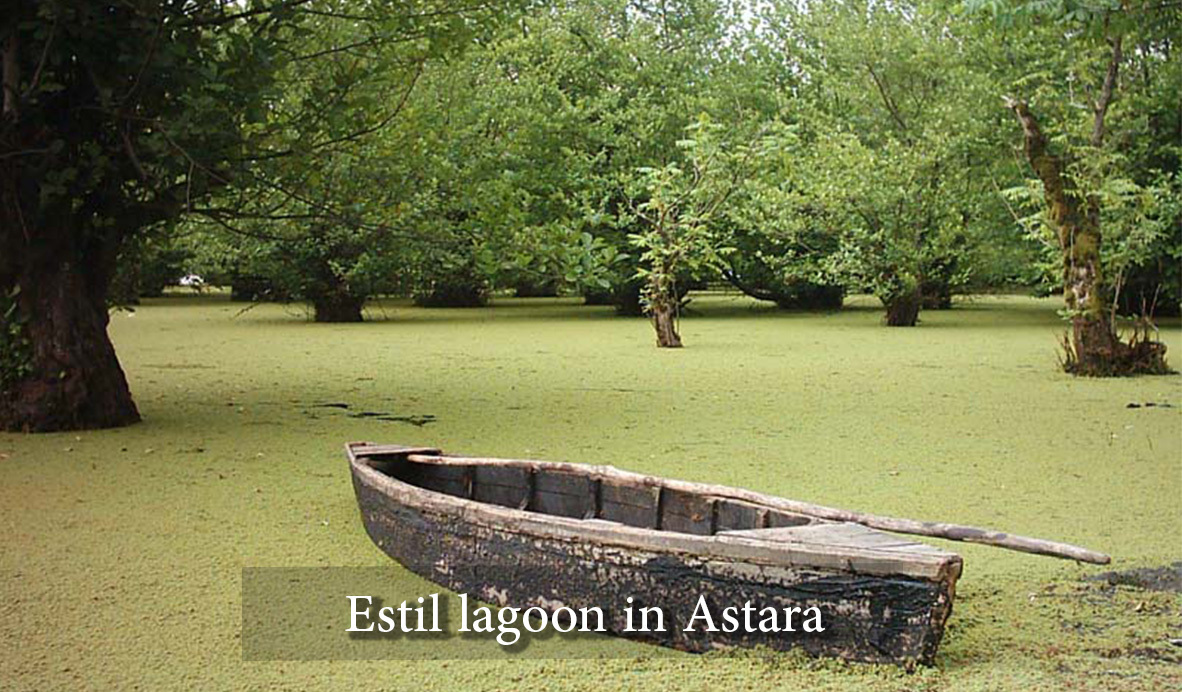 Darband village is located seven kilometers southwest of Astara and is considered one of the most beautiful villages in this city. This village has an excellent location due to its nobleness to Estil Lagoon, the green foothills of the Talesh mountain range, and vast rice fields.

Heyran is the name of one of Gilan’s scenic villages, considered one of the most popular tourist spots in Iran due to its extreme beauty and pleasant weather. The neck of this village overlooks the forest-covered mountains on one side, and the other overlooks a shallow valley through which the Astara river, called “Agh Chai,” flows. Hiran pass is covered with fog most of the time, and it is covered with flowers and forest plants in the hot seasons.

The Hiran cable car is located west of Astara and at the end of the Hiran pass, and it connects to the easternmost point of Fandalo Forest Park by traveling a 1500-meter green dream path. The height of this cable car is 1,730 meters above sea level. Hiran sled is the longest rail sled in Iran and is one of the tourist attractions of Astara, located in Hiran tourist village, which was put into operation in 2015. Hiran sled is also considered among the largest sleds in the Middle East. Laton waterfall in the south of Astara, in the vicinity of the stable mountain of Spinas, and in the middle of a dense forest with lush plants, trees such as plums, bees, pears, walnuts, hazelnuts, and wild apples; There is a high and spectacular waterfall. This waterfall is called Laton and can be seen from a distance of 500 meters. This four-season and beautiful waterfall is one of the 30 tallest waterfalls in the world and is known as one of the tallest in Iran. Laton waterfall’s main and upper catchment height is 105 meters, and its width is five meters. Also, the lower catchment of Laton is 65 meters with a width of 10 meters, and its total height reaches 107 meters.

Laton waterfall was included in Iran’s natural heritage list as a natural and valuable work in 2018 under national registration number 645. Kote Kome village is considered a small and beautiful village, whose fame is mainly due to the existence of the Laton waterfall. This village is a unique environment to experience life. Other famous places in this village include its small spa.

The beautiful Sadaf beach of Astara is one of the cleanest and most pristine coastal areas of the Caspian Sea, which always welcomes many travelers and tourists from all over the country and the world. This beach is located 10 km from Astara towards Rasht and has facilities such as children’s play and entertainment, health plan and swimming area, temporary resorts, beaches offering services, the possibility of setting up tents, rescue teams, lifeguards, and fishing. 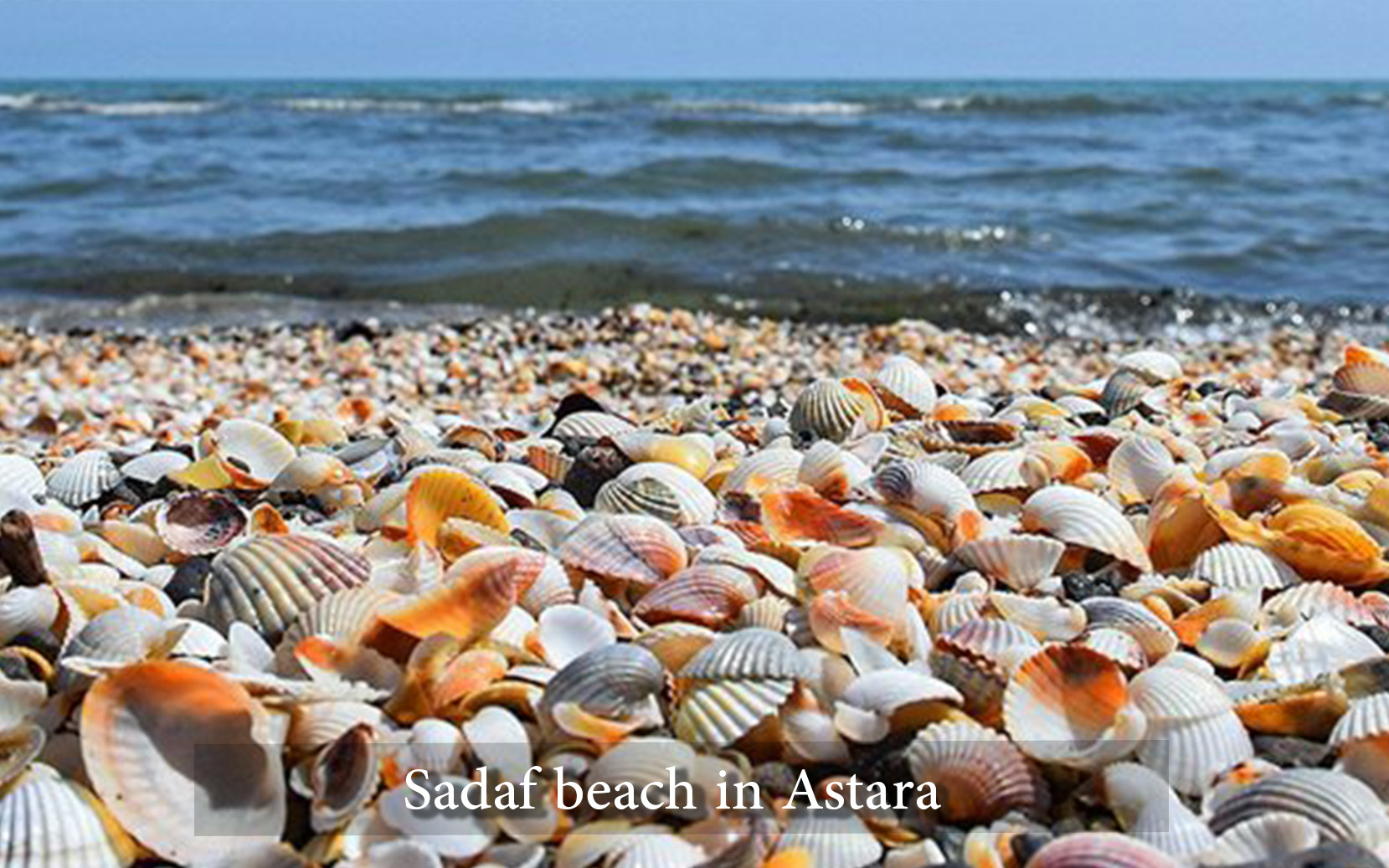 Lundville Wildlife Sanctuary is located in Astara city in Gilan province. This area was declared a protected area in 1973. This shelter is a unique example of the remnants of the Hyrcanian steppe forests, which houses essential plant and animal species. This beautiful tea garden is located two kilometers southwest of Astara and is very popular among tourists due to its stunning views. This garden is the only tea cultivation center in Astara. The magnificent Spinas mountain range is located behind the stunning Still Lagoon, and the towering Laton Falls originates from the slopes of this mountain range. Mount Espinas, with its beautiful and astonishing views, is considered an attractive destination for mountaineers. Astara Beach Market is one of the most important commercial centers of Gilan province and one of the most famous markets in Iran, which is known as “Basat” among the local people of Astara.

This beautiful garden was established in Farabi Street in 1977, and it has 220 different types of cacti from Brazil, Mexico, Peru, Bolivia, Argentina, and South America. The oldest and oldest cactus in the Middle East also lives in this beautiful paradise.

Bibi Yanlu Forest Park is one of the Hyrcanian forests of the country, which is located 5 km from Astara, on the side of the Astara-Ardebil road. This unique park has unique and extraordinary natural attractions that attract the attention of many nature lovers and tourists.

The tomb of Pir Qutbuddin is located three kilometers from the Astara-Ardebil road, inside the cemetery of Baghesara village, on a relatively high hill. This brick building, which is more than 11 meters long and 6 meters wide, belongs to the Qajar period. One of the sights of Astara is the Shandani Castle on the mountain of the same name on the border of Iran and Azerbaijan. This castle can be seen on the road from Astara to Ardabil, Hiran region, above the village of “Haji Amir Bala” and “Haji Amir Baman”. The uprising of Hamza Khan Talshi is one of the critical events that this castle witnessed during the Safavid era and Shah Abbas.

Mande, the oldest park in Astara, is a garden that was remembered from the Qajar period. There is a children’s and teenagers’ intellectual center in this garden, a library, and other buildings. 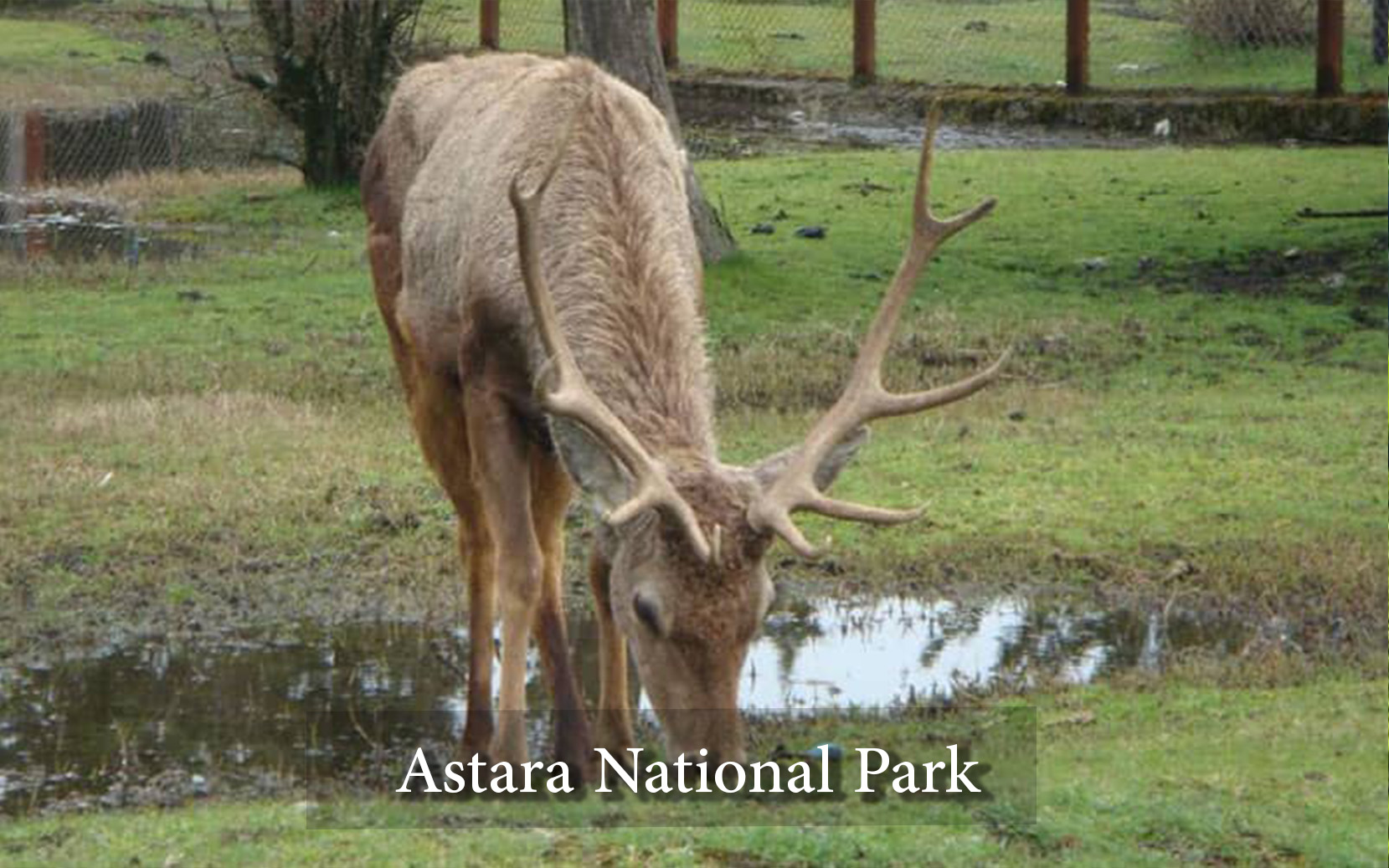 Some of the dishes of this region are almost similar to that country’s food due to its border with Russia. Still, most of the traditional dishes of Astara are completely Iranian, and it is better not to miss their unique taste when visiting this region. Chicken and fish longi, chicken bastirma, Chighirtama, Mesma, Borani polo, Jazor, or Qorma are considered to be the typical local food of this city.

Handicrafts and souvenirs of Astara

The handiwork of Astara artists represents a part of the customs and traditions of the region’s people and their talent, and these artists produce various products. Carpet weaving, lacquer carving, mat weaving, pottery production, smoked fish, aromatic rice, pickles, jams, unleavened bread, and bee products are some of the souvenirs and handicrafts of this city.

The beautiful city of Astara is one of the incredible cities in the north of Iran, with diverse landscapes and numerous natural attractions. This city has a clear environmental, natural, economic, and cultural identity that makes it unique. Sitotravel tourism service agency is ready to provide services to you, dear tourists, to prepare the conditions and accompany you to travel to this city and other tourist destinations in Iran.

Previous postFilband village, The sea of ​​clouds
Next postGolestan Palace, a masterpiece of Iranian architecture and art